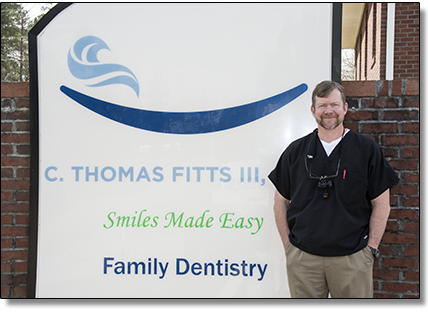 Doctor Fitts was born and raised in Lugoff, South Carolina and graduated from Lugoff-Elgin High School in 1987. He has a BS in Chemistry from Wofford College and received his DMD from the MUSC College of Dental Medicine in 1996. He performed his General Practice Residency at Palmetto Health Richland in 1997 and became a Fellow of the Academy of General Dentistry in 2003.

He has over 20 years of experience practicing dentistry and is an alumnus of the renowned Pankey Institute. With over 840 hours of continuing education, he is proficient in cosmetic/esthetic dentistry, implants, endodontics (root canals), crowns, bridges, composite fillings (tooth – colored),   dentures, partials, and all aspects of general dentistry. 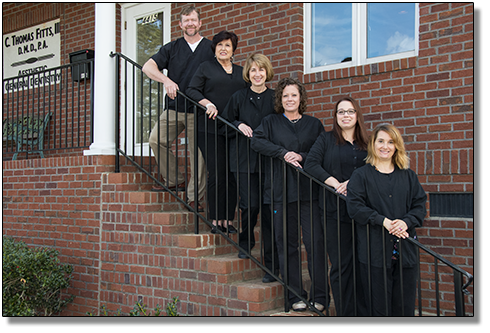 Martha Hilton – Office Manager
Martha has been in the dental profession for 44 years and opened the practice with Dr. Fitts in 1998. She manages all front desk duties including scheduling, finances, and insurance. She loves working with and helping people, and strives to create a patient-friendly atmosphere.

Martha is a native of Chapin, South Carolina and a graduate of Chapin High School. She has two grown sons and four grandchildren
. Her hobbies are spending time with family, friends, gardening, sewing and traveling with her husband.

Brenda Linkous – Dental Hygienist
Brenda is from West Virginia and graduated from West Virginia Career College in Dental/Secretarial Assisting Program, and worked at West Virginia University Dental School in Department of Orthodontics as a dental assistant. After marriage to a military career soldier, where they were stationed in several states and Germany, she was employed as a dental assistant with the Department of the Army. She received numerous awards for her support with the dental service mission to improve quality of care, as well as, earning the Civilian Service Employee of the Year Medal.

Upon returning to the United States, her employment continued with the Army Dental Services at Ft. Jackson. Later, she decided to further her education in dental hygiene at Midlands Technical College, where she earned membership to the Phi Theta Kappa Society, National Technical Honor Society, and Who’s Who Among Students In American Junior Colleges. After earning her Associate in Health Science in Dental Hygiene degree, with Cum Laude honors, she returned to government employment with the Department of Veterans Affairs in Hampton, Virginia, to serve those who served our country. While there she received awards for volunteering with Health Fairs to educate veterans with health related issues. She decided to return to Columbia and entered into private practice, and joined Dr. Fitts in 2015, to continue oral hygiene services and patient education.

Her interest include; volunteering for community service projects with the Elks Lodge, gardening, and reading. She and her husband are members of the American Poolplayers Association, the world’s largest pool league.

Tina McCaffire, RDH
Tina was born in Tennessee, but grew up in Georgia.  The army moved her and her husband to Columbia in September 2016.  She has been a hygienist for 17 years and graduated from Columbus Technical College in Columbus, GA.  She enjoys traveling, spending time with friends and family, reading, antiquing and crossfit.  She is an animal lover and has two dogs, Bodhi and Gemma.

Marcy Rozier
Marcy was born in Texas, but grew up in South Carolina.  She attended the College of Charleston for Geology.  She has three children who keep her busy.  She works at the front desk with scheduling, finances, and insurance.  She enjoys spending time with friends and family and traveling.